The Madness of King James: Why America Can't Handle Its News Anymore 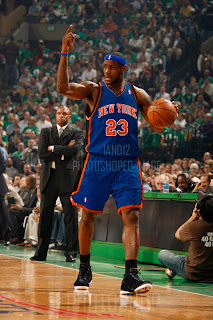 When Lebron James announces his new basketball home on a maudlin hour-long special, live from Greenwich, Connecticut, he will end an ugly saga that betrayed how brutally unprepared our country is to deal with matters of consequence as technology uncontrollably lurches forward.

On July 1, Lebron James became a free agent. In the preceding weeks (if not months and years), speculation had run rampant, but on that day his free agency became one of the biggest news stories of the Twitter era, rumors exploding from every corner of the internet. Journalists, fellow players, anonymous front office executives, friends of restaurant owners- anyone who could claim a degree of separation from the Source, advanced definitive clues to where Lebron was heading. No entity was more crippled by this phenomenon than ESPN.

ESPN’s embarrassing coverage demonstrated that despite being one of the world’s major news organizations, it was unprepared to handle a mega story that it has known was coming for two years. Desperate not to be scooped, its writers displayed a complete inability to decipher fact from rumor, or fact from relevant fact. Writers lunged from theory to theory- 'Lebron is going to Chicago', 'Lebron is going to New York', 'Lebron is going to Miami', often without any actual developments to bolster their case. One tweet lamented the news that Lebron’s agent had changed his LLC address to Chicago. Another gushed of Lebron’s reservation at a steakhouse in New York.

Information on flights, meals, hotel bookings and phone calls were bandied about, along with deep ruminations on Lebron’s inner psychology. Aware of the tenuousness of their claims, writers deftly pulled Orwellian hijinks with each new 'development', reflecting, 'Lebron was always going to stay in Cleveland', 'Miami was a done deal from the beginning,' 'the Knicks were never in play', only to discard such claims in subsequent posts. During rare, sane moments, a writer would admit that Lebron probably hadn’t made up his mind at all.

There are at least two reasons the complete botching of this story is more important than basketball.

First, we have long recognized that in most news reporting, the immediacy of the 24 hour news cycle is dangerous, allowing for little fact-checking. This problem has only been exacerbated by explosion of Twitter and the increasing number of professionals religiously consulting their iPhones and Blackberries. If the whole world can learn the one sentence synopsis of a story as it is happening, news agencies must have some substance to offer immediately as well. News organizations were all over the Stanley McChrystal story- before the Rolling Stone story was fully published. Most were reacting to excerpts or paraphrased summaries of the article. That is how the important point of the article- the collapse of our Afghanistan war strategy, got lost in the shuffle.

A less recent but even more poignant example would be the ‘balloon boy’ story, during which television news converged on live coverage of a boy in a runaway balloon- only there wasn’t any boy in the balloon. The rush to war in 2003 was bad enough. Can you imagine if rumors related to Saddam Hussein and weapons of mass destruction had proliferated more quickly and more wildly than they had? But examples should not even be necessary in stating a most obvious principle- a world in which newsmakers have no time to reflect before speaking, and policymakers have no time to reflect before acting is highly dangerous.

Our faith in experts is equally misguided, and in the case of 'political analysts', equally dangerous. In sports, inaccuracy is usually of no consequence. Neither the passive fan nor diehard junkie really cares whether someone on NBA.com accurately predicts the outcome of a game. It can be startling to see so-called experts predicting NFL outcomes with the same accuracy as a coin toss or doing worse in fantasy sports than the average online participant. But because such few figures in sports can tell longtime sports fans or former athletes information they don’t already know, the ‘experts’ main role is entertainment rather than analysis.

In theory, the purpose of political analysts is also entertainment. Listen to someone like ‘strategist’ Donna Bazile, for example. Has she ever said anything particularly insightful? In truth, anyone who reads history, frequents multiple new sources daily and owns the right make-up kit could make at least a guest appearance on a cable news show. Analysis is generally trite, with even smart guests stunted by the short, adversarial format. Yet, in contrast to their mastery of sports, most Americans are tragically dependent on the political news establishment. More Americans can debate Federer-Nadal on their own than critique Thomas Friedman’s inane observations on globalization. That is why Friedman is read all over the world as an economic and foreign policy expert despite being wrong with confounding frequency.

It is too late to wish for a world in which people do not crave penetrating analysis of events that have just taken place or hunger for further information that simply does not exist. As sports fans, our shortcomings in this regard have made the Lebron James saga particularly painful. Even as I write this, I peruse Twitter for clues that I know are ultimately meaningless. But at least basketball fans understand the sport well enough to ignore the chatter and make their own reasoned predictions. In politics, most Americans lack the educational background and interest to inform themselves. And so they recline on the couch, and let the talking heads yammer away.
Posted by rovingstorm at 11:02 AM No comments: