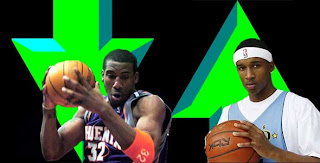 I silently fume at the ESPN stat line for Mario Chalmers. The young Miami Heat point guard has just dropped a total dud of a game: 5 points and 1 assist. The one assist roiled me, because going into the final game of the week I was behind by only two assists against my fantasy basketball opponent. At the very moment I had counted on him, Chalmers had choked and cost me a category. That was the final straw- after weeks of watching Chalmers play poorly or disappear during crunch time, I dropped him from my fantasy basketball team, the Roving Storm.

In these dark and desperate times, few things bring me greater joy than managing the Roving Storm in the online fantasy league, When The Garden Was Dead, where I double as commissioner, competing against eleven friends in a 20-week season. The league’s name refers to the moribund Madison Square Garden crowd, which has had to endure the worst run in Knicks history at the same time it has had to weather the Bush presidency, two wars and an economic collapse. Yes, it’s been a tough decade. In the world of fantasy basketball, however, those problems melt away, replaced by the headaches that come with running a basketball team.

It starts with underperforming players. I curse loudly as I watch Baron Davis shoot 1 for 14, again. The bastard just doesn’t know when to stop! Of course, if he doesn’t respond to his real-life coach, he’s not going to respond to his fake coach yelling at the TV screen. But I can dream.

I make trades to bring balance to the team, including one controversial swap (Ben Wallace for Paul Pierce) that leads to a massive email war over the definition of collusion. I ultimately rework the trade (Marcus Camby for Paul Pierce), placating the more hostile opponents of the trade, who had been rallying other team owners to veto it. I feel like Barack Obama, ending with a lesser deal than I would have liked, but so winning the votes required for passage. My sympathy for the Senate healthcare plan momentarily increases.

Making trades is hard. My opponents are not stupid- no one wants a washed up, injured Tracy McGrady, his impressive career be damned. I am forced to drop McGrady for nothing. Knicks General Manager Donnie Walsh has no such option in dumping his worthless hacks, who are under multiyear contracts.

Sundays, the Lord’s day of rest, are particularly anxious. In fantasy basketball leagues people field their thirteen-player teams against opponents for one week, Monday through Sunday. The teams are matched up according to eight categories: points, rebounds, assists, steals, blocks, three pointers made, field goal percentage and free throw percentage. Each of these categories can be won or lost in a given week, and these results are compiled over the long season. Most teams are evenly matched in at least some of these categories, and until the final NBA game ends Sunday night, the results for the whole week hang in balance.

Fantasy basketball fundamentally changes the way a fan watches NBA basketball. Other than the Knicks, I now rarely root for any team to beat another, far more concerned with the individual players on the court. Hardly any NBA game being played at a given moment does not involve either one of my fantasy players or one of my opponent’s. This makes rooting during games a truly absurd exercise. When Kevin Love is guarding Carl Landry (both are my players), I root for Carl Landry to score, or, in the alternative, for Kevin Love to block the shot or get the rebound off Landry’s miss. During one very close game between the Bobcats and the Knicks, I was schizophrenically rooting for the Knicks to win, but for the Bobcats’ guard Ray Felton to score as many points as possible in the process.

I worry sometime that all NBA players are becoming a series of statistics, the way insurance companies think of patients or military commanders deploy soldiers. One of the keys to fantasy success is the ability to remove conceptions you may have of a player (“he’s clutch under pressure,” “he’s a good defender,” “he’s an all-star”) with more perfunctory questions: “what is his field goal percentage?” “How many blocks a game does he get?” “How has he played in the last thirty days?”

ESPN pits the four best fantasy teams in each league against each other for four weeks of playoffs, which in turn end with the conclusion of the NBA regular season. That is good. Whether or not I win the “Living The Dream Cup,” I’ll be able to kick back and watch the NBA playoffs like a normal fan, appreciating the beauty of the game, without stat lines racing through my head.
Posted by rovingstorm at 1:57 PM

Great article about fantasy sports. I am in a league too and everything you said is true.