The Fear Behind The Fear 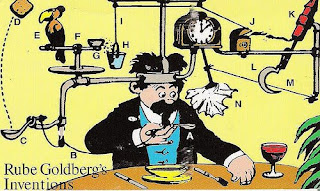 Would Jack Kerouac kick back and hammer out his poems in smooth jazz café? Maybe, if it had wireless internet. My current dig has everything you want- great coffee, reliable wireless, plenty of seating, and a happy little collection of local Brooklyn newspapers that old men ingest while they sip tea and watch the first snow of the year fly by their windows.

There are a lot of things that you used to make me afraid of getting old. Doesn’t it make ya wince when you watch an old flick and think, "Man, he used to look like that? And now he looks like this?" It’s bad enough to watch relatives age, but seeing it happen to impregnable famous athletes and movie stars is more sudden dispiriting. Yes, yes, looks are superficial and all that, but what about brains? Until I saw Guido Calabrese majestically and literally hold court in the Second Circuit, I was having trouble wrapping my head around the older and wiser concept. Then you’ve got health issues, oh man, the health issues. It’s pretty easy to picture that part of the journey. Long gone are the days when I would knock myself unconscious diving into a brick wall playing Chinese handball. Recently I pulled a muscle while I was sleeping. Tough times indeed. Nobody ever is what he used to be. But now there’s a new cause for agingaphobia, and it has to with Sergei Brin, Steve Jobs and all the other techno mad men.

Watching a sexagenarian open an attachment is painfully unfair. They worked all their lives to get this far, and now they can’t even open the modern envelope. I gasp- that could be me one day. After all, I declared boldly in 1998 that email would never take off. I was the last guy to get a cell phone, preferring to memorize numbers in my head or scrawl them on my hand as I marched into the night with quarters in my back pocket. I didn’t send a text message till 2006, and learned how to upload pictures what seems like yesterday.

As we get older and stop making sense, our children and grandchildren will play with toys that seem like magic, and young associates will roll their eyes every time we say, “the what?” or “how/where?” Every step you fall behind now is two you’ll have to make up later. Lyndon Johnson knew this- that’s why the Great Society begat Head Start. Every runner knows this- that’s why you’ve gotta work the hills. The internet is no information highway, my friends, it’s a raging river, and all boats are sinkable. My new year’s resolution is to keep my head above water, fear of technology trumped by fear of falling too far behind to enjoy the future milk and honey years